The Mission-Oriented Seismic Research Program (M-OSRP) is a research program and petroleum industry consortium, started in January 2001, at the University of Houston, to address pressing high priority seismic exploration and production problems whose solutions would have the most significant positive impact on our ability to locate and produce hydrocarbons. We begin with the critically important first step of the selection and priority of pressing problems and challenges that need to be addressed. The magnitude of the challenges being addressed within M-OSRP often requires new thinking and concept development, and is thus a fundamental research activity. The framework, method, solution and algorithms to solve the problem ( and whether, in fact, the problem can be solved) are all initially unknown. Mission-oriented seismic research belongs to a category of fundamental research, directed fundamental research, that begins with high impact fundamental seismic exploration and production challenges, and commits to solving them. 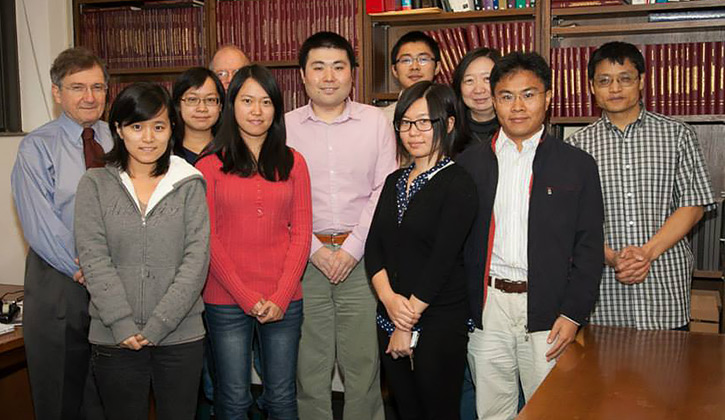 The M-OSRP program is centered and administrated in the department of Physics. Its research and educational activity, and the mentoring and support of graduate students, is within the field of seismic physics, and the students earn their graduate degrees in the physics department. However, the program is open to interested and capable students from other departments, for example, from the Earth and Atmospheric Sciences Department and the Mathematics Department.

The projects (and the allocation of resources) within M-OSRP recognizes industry trends and the portfolios of our petroleum industry sponsors. The recent emphasis on more complex and challenging off-shore and on-shore plays has brought with it a new set of tough seismic priorities and issues to be addressed. Among those issues is a demand for significantly more effective multiple removal capability, with accurate amplitude and phase prediction of the multiple at all offsets, allowing subtraction of multiples without damaging proximal or interfering primaries. That requirement has moved multiple removal back to center stage, for M-OSRP, as a fundamental issue, requiring new thinking and concepts and the delivery of significant greater and more effective capability. M-OSRP has a three part strategy for delivering a step improvement in multiple removal capability. The three parts consist of: (1) locating and extracting the further multiple capability from the inverse scattering series (ISS) , (2) provide the prerequisites of all ISS subseries , e.g., using Green’s theorem derived methods for predicting the reference wave and the scattered wave, and performing source and receiver deghosting and (3) develop an alternative to the energy minimization criteria behind current adaptive subtraction methods, where the criteria derives from, and hence always aligns with, and serves, the ISS multiple attenuation methods- allowing the latter to reach their potential and deliver their promise.

M-OSRP has a significant investment in responding to the challenges faced by seismic imaging and inversion techniques. Within traditional velocity dependent depth imaging methods , a first wave theory RTM has been developed within M-OSRP and comparisons with current industry standard asymptotic RTM are underway. ISS direct depth imaging without the velocity model was tested on field data, and a stringent set of criteria was satisfied indicating that the direct depth imaging method without the velocity model is viable. The steps and strategy to take us from ‘viable’ to a useful contribution to the seismic imaging tool-box has been defined and communicated. One ingredient of that strategy will ‘spin-off’ a method to wave theory model events that only have P wave episodes in their history, in a fully elastic heterogeneous medium.

M-OSRP has a portfolio of projects with short, medium, and longer term milestones and deliverables. The program produces reports and well-documented research prototype code. There is significant cooperative/ collaboration/ communication and interaction between M-OSRP and its petroleum industry sponsors; and, our eight world-class seismic expert adjunct professors, from our sponsor companies, play an important role in mentoring and guiding our graduate students. We never lose sight of the fact that we are an academic institution and activity and that our core and central responsibility is to educate and mentor students. We are enormously grateful to our sponsors for the opportunity to work together to simultaneously serve aligned academic, scientific and petroleum industry interests and objectives, while solving the right problem.